Looking for something different to do this vacation or on your next trip to Cancun and the Riviera Maya?  Spend a couple of days exploring Merida, one of Mexico’s oldest and loveliest cities. Known as “La Ciudad Blanca” or the “White City,” Mérida boasts colonial churches dating from the 16th, 17th and 18th centuries, 19th-century civic buildings, and gracious old mansions imbued with all the opulence of la belle époque. Yet, the splendor of its buildings is only half the story: it has museums, concerts every night and the traditional cuisine is a sophisticated blend of ingredients from the Old World and the New.

Merida offers unforgettable experiences that are a contrast to ultramodern Cancun. Dine under the trees in a gracious old square as you listen to a guitar trio play a traditional serenade, shop for colorful Mexican handicrafts and local art or stroll through the different barrios or neighborhoods. The city has a reputation as a cultural center and there really is something different on every night, from open-air concerts and dance performances to art exhibitions and even video mapping and street theatre. 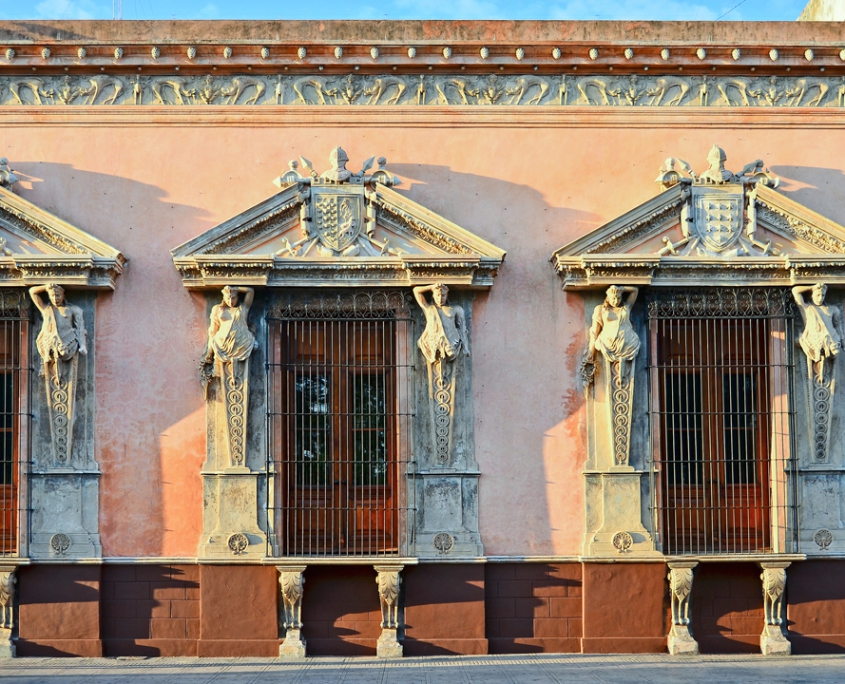 Center of civic life, the Main Square or Plaza de Armas must be the first place you visit. It is dominated by the San Ildefonso Cathedral, one of the oldest cathedrals in the Americas (built 1562-1599). City Hall is across the park from the Cathedral, Palacio de Gobierno, the State Government building is on the north side of the square and Casa de Montejo, the home of Francisco Montejo, the Spanish grandee who founded Merida in 1542, is to the south.

Visit the Casa Montejo Museum for a glimpse of Merida history and the impressive Banamex exhibition of folk art from all over the country, including some huge trees of life and a life-size jaguar sculpted from clay.

The work of local artists is on display at the Macay Gallery (Museo de Arte Contemporáneo Yucateco) and the Palacio de Gobierno, where a series of murals by Merida artist Fernando Castro Pacheco tell the creation story of the Maya, the Spanish Conquest, the Caste War, henequen boom and other episodes in the history of the Yucatan.

Visit the main square in the evening to see the magnificent cathedral lit up with a video mapping display and linger for a while with an ice cream or a marquesita, the Yucatan’s super sweet take on a waffle, and watch the world go by. Listen to local musicians, buy a bunch of flowers and even bargain for a locally made hammock or Panama hat. There’s a folk dance show every Monday evening in front of City Hall and the entire area is cordoned off on Sundays for Merida en Domingo, a gala event featuring craft and food stalls, live music and folk dances.

Every January, on the eve of the anniversary of the founding of Merida, the Mayor leads a procession to the main square where local trova musicians serenade the city with Las Mañanitas, the Mexican birthday song.

From the main square it’s a short walk to Merida’s bustling markets and the Yucatan Handicrafts Center in the former Las Monjas Convent. 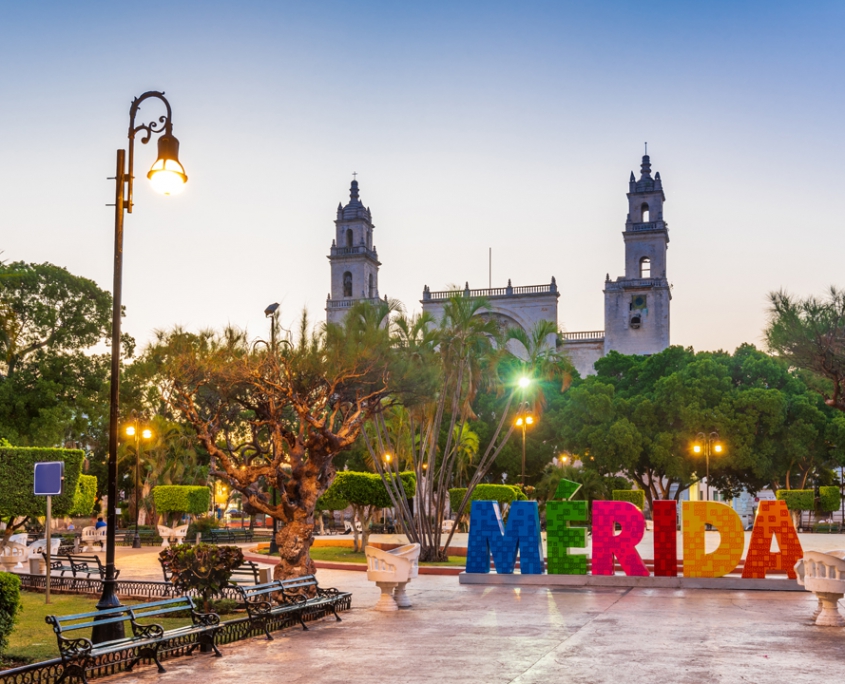 Leave the main square behind and walk north along Calle 60 to Parque Hidalgo, you’ll soon see the 17th-century Church of the Third Order, the University of the Yucatan, one of the oldest in Mexico, and the opulent Peon Contreras Theater, home of the Yucatan Symphony Orchestra.

On Fridays, the theater is normally the departure point for Noches de Leyendas, a street theater tour of the historic city center. Due to COVID-19 restrictions, some events are suspended, so it is a good idea to check the current schedule online.

With its 16th-century church, Plaza Santa Lucia is a gathering place for the guitar-strumming trios who play romantic ballads called trova and a free concert is staged in the square every Thursday night. There are a number of galleries, boutiques and craft shops around the square that are worth visiting if you are looking for Mexican folk art.

If you want to explore more of Merida’s barrios, head to Santa Ana or La Mejorada, site of the colonial convent of the same name, the Museum of Yucatecan Music and the Popular Art Museum. Both neighborhoods have many old houses that have been restored and are now homes, galleries and cultural centers, restaurants and boutique hotels. 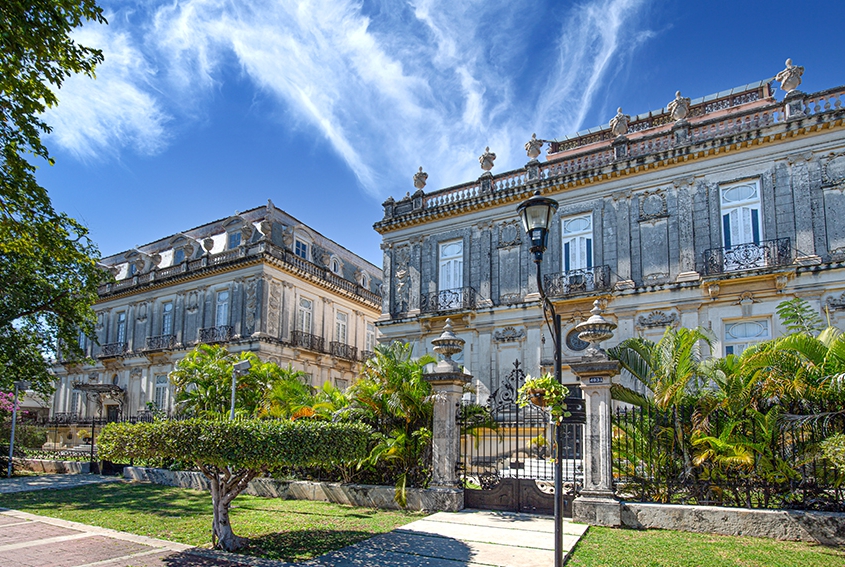 A trip to Merida isn’t complete without a visit to Paseo Montejo, six blocks north of Santa Lucia and one block from Santa Ana church. Inspired by the Champs Elysées in Paris, this wide tree-lined boulevard is a magnificent setting for the opulent homes of the henequen barons who became wealthy from the cultivation of henequen or sisal in the late 19th century and early years of the 20th century. Resembling chateaus, European town houses or even mosques, they are the legacy of the heady days when money flowed like water in Merida.

Start your walk in the small park at the beginning of the avenue, the venue for a Mexican evening of music and dance on Saturdays. If you are shopping for souvenirs, the shop in the boutique hotel next to the square has a fine collection of Mexican folk art.

The twin houses called the Casas Gemelas start Paseo Montejo’s parade of palaces and one of them is now a museum. Other mansions include Casa Medina and the beautiful Quinta Montes Molina, a home which still has the original 19th and early 20th-century furniture and art of the owners and is open to the public. The largest of all the mansions in Paseo Montejo is Palacio Canton, home of the Regional Anthropology and History Museum where ceramics, figurines, jewelry and other artifacts unearthed at the state’s many archaeological sites are on display.

For more Mayan culture, visit the Maya World Museum on Prolongacion Montejo. This vanguard museum has fascinating multimedia exhibits on the Maya World landscape, different aspects of ancient Mayan culture and society and the traditions that survive to this day.

Thomas More Travel offers Merida day trips and overnight stays that include a visit to the ancient Maya city of Uxmal, and representatives can help you with accommodation and a sightseeing itinerary if you would like to stay longer. Merida is a three-and-a half-hour drive from Cancún via the toll road.