CLOSE ENCOUNTERS WITH THE COLORFUL INHABITANTS OF THE CORAL REEF

Are you ready to don your snorkel mask and dive into a world of beauty? Stretching from Contoy to Belize, the Mesoamerican Reef is the second longest coral reef chain in the world, and it is home to a host of colorful fish of all shapes and sizes. Here are some of the most common species to look out for wherever you snorkel or dive in the Mexican Caribbean, whether that’s Cancun or Isla Mujeres, Puerto Morelos, Playa del Carmen and Cozumel, Akumal or Xel-Ha. 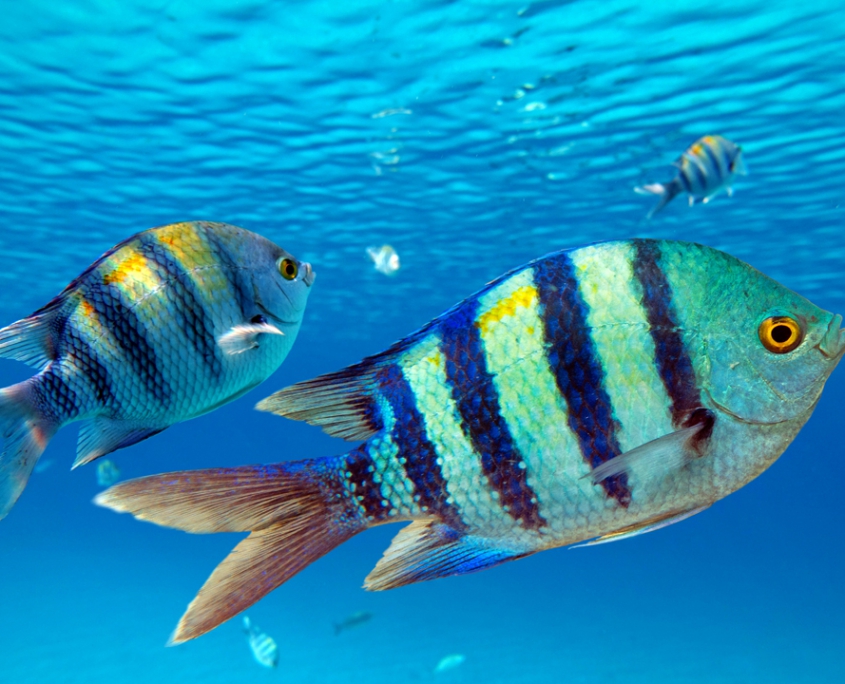 A member of the damselfish family, this is one of the most common fish you’ll see in the Mexican Caribbean. Large schools of them gather in the vicinity of coral reefs and in inlets and they seem to be unfazed by the presence of snorkelers!

It owes its name “sergeant major” to five black stripes that resemble military insignia, and to the fact that the male is very territorial when guarding its nest. It feeds on algae and shrimp larvae. 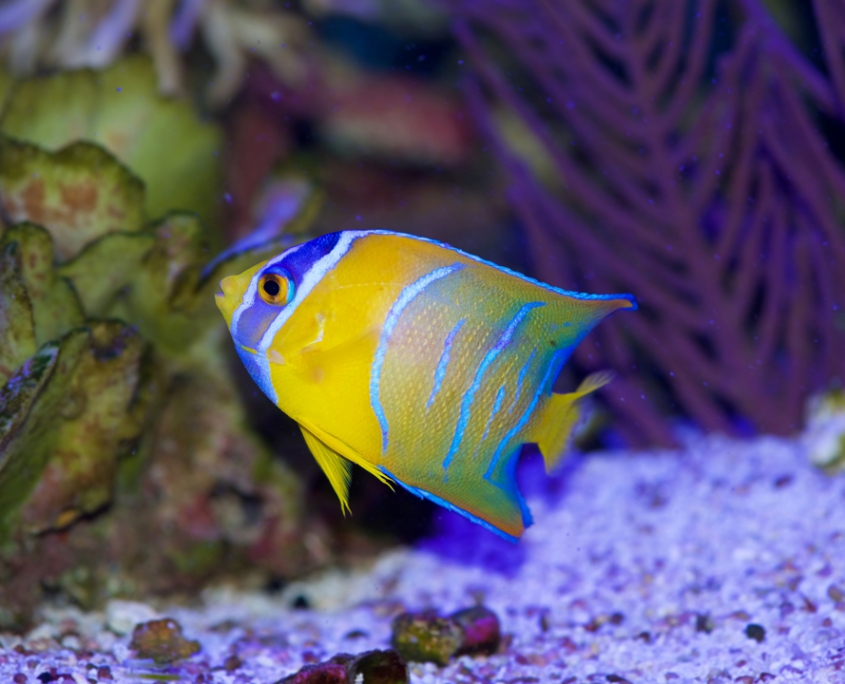 This regal reef beauty is commonly seen in pairs and some biologists speculate that this behavior may suggest that they form long-standing relationships. The blue angelfish also inhabits local reefs, and you can tell them apart by looking for the dark ringed spot resembling a crown on the head and the completely yellow tail. 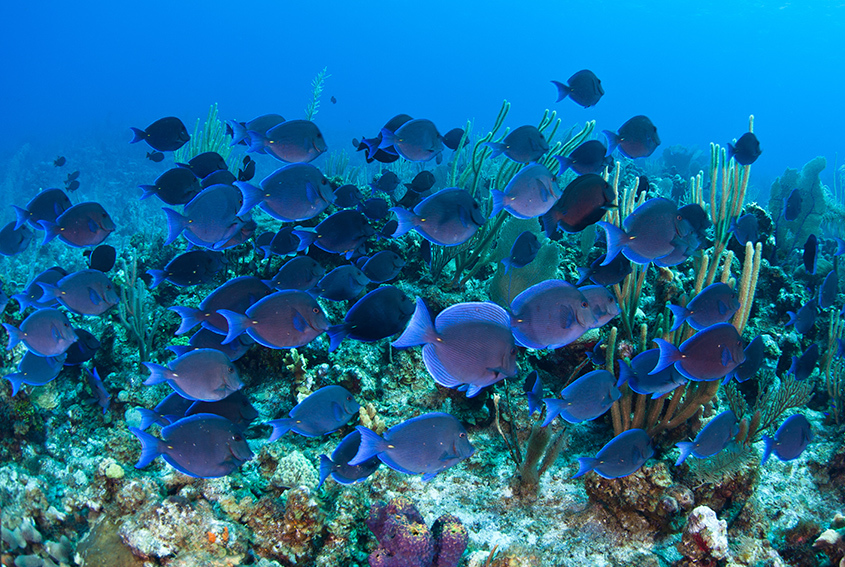 The Blue Tang is a striking dark blue fish that starts life as a bright yellow juvenile and then turns pale blue and pale yellow before reaching maturity. Also known as the surgeonfish due to the scalpel-shaped spines on either side of its tail, it feeds on algae and may be seen in pairs or schools near reefs and in caletas or inlets such as Xel-Ha, Yalku and Chankanaab lagoon on Cozumel. 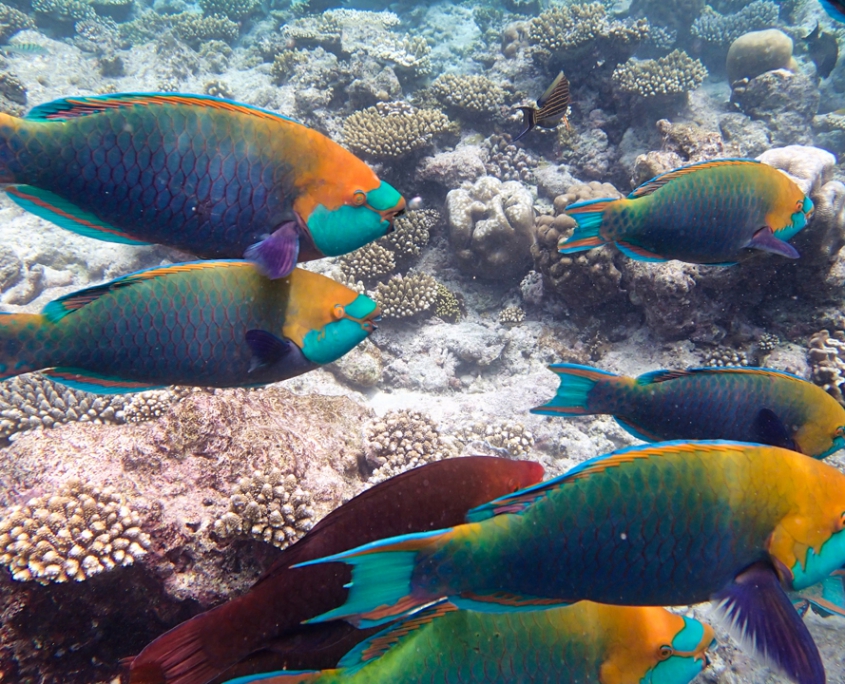 Several members of the parrotfish family can be seen near reefs in the Cancun-Isla Mujeres area, the Riviera Maya and Cozumel. Look out for Rainbow Parrotfish, Midnight Parrotfish and Striped Parrotfish.

How did parrotfish get their name? Their powerful jaws resemble a parrot’s bill, and they use them to bite off fragments of coral, rock, algae and grind up mollusk shells. You may even hear them at work as you put your head under the water. After digestion, they excrete sand, and this helps create the white beaches of the Mexican Caribbean. 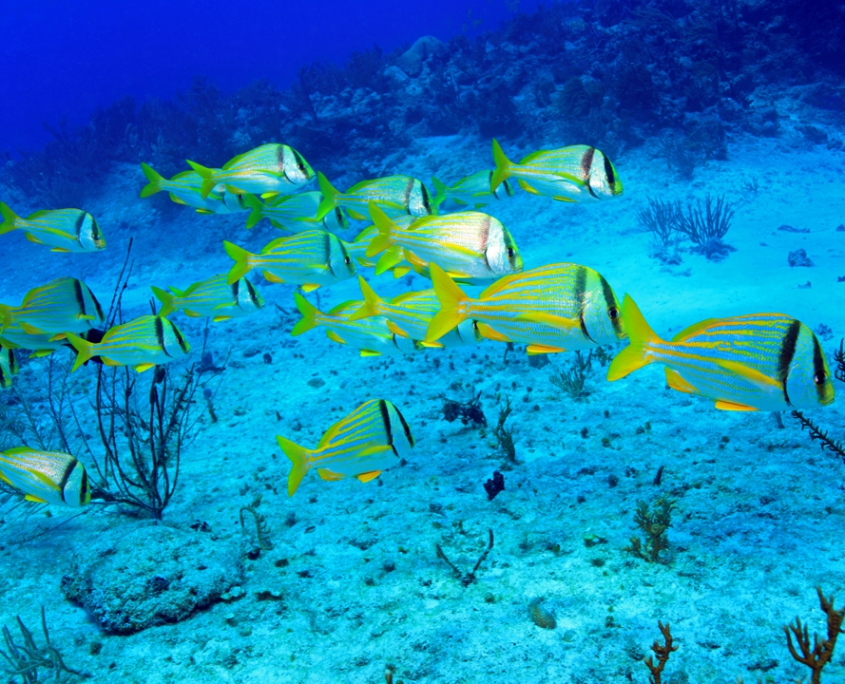 Recognizable for its yellow body and black stripes, porkfish congregate in schools near the reef crest. They make a grunting noise by rubbing their teeth together. Juvenile fish are “cleaners,” picking parasites from the scales of other species. 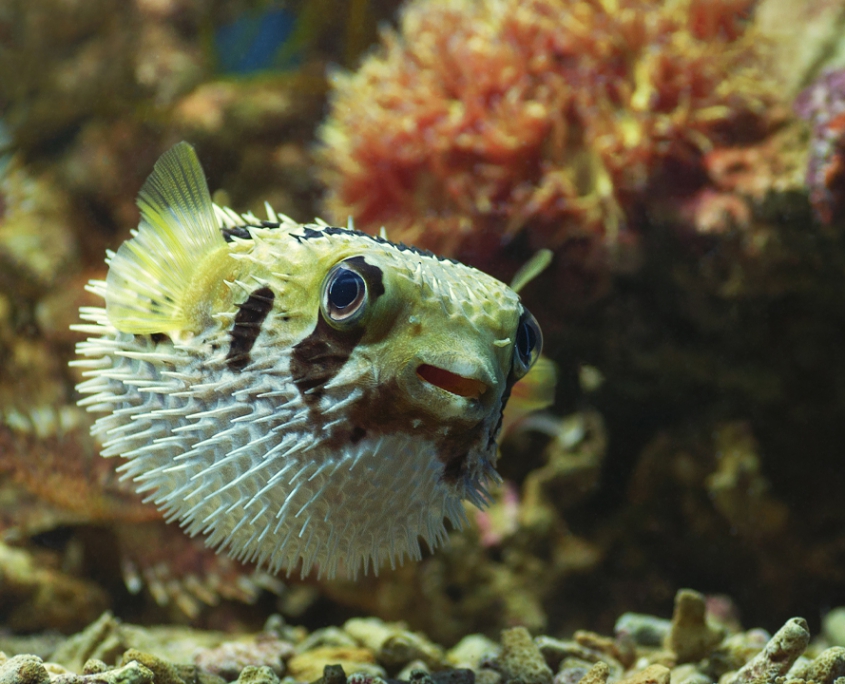 This fish hides on the reef during the day and hunts for crabs, sea urchins and snails at night. Covered in spines, it swells like a balloon by taking in water and changes color when it feels threatened, hence its other names: balloon or puffer fish. 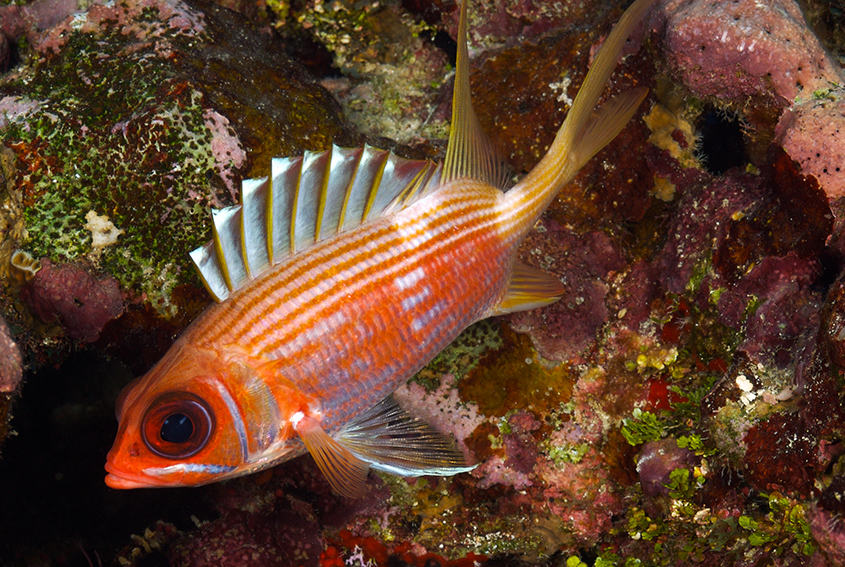 This salmon pink species hides in crevices or under ledges on the reef during the day and ventures out at night to hunt for crabs and crustaceans.

And that’s just for starters! You’ll also come across trumpetfish, grunts, trunkfish and scrawled cowfish, damsel and butterfly fish, among others and larger fish like jacks, snappers, hogfish, grouper and barracuda. As you swim past the reef, you’ll notice a variety of even smaller creatures sheltering among the corals, algae and sponges. And be sure to keep a look out for sea turtles, spotted eagle rays, octopus and lobster.