Full of feeling and rich in symbolism, fragrance and color, Dia de Muertos or the Day of the Dead on November 1 and 2 is one of Mexico’s most important traditions and is on the World Heritage list in the intangible culture category. Throughout the country, families are erecting altars in memory of loved ones who have passed on and who are believed to return to earth for a short time. At Royal Resorts, employees in many different departments will be keeping faith with this ancient custom, celebrating their rich heritage and sharing it with guests by participating in the Dia de Muertos Altar Competition.

On Thursday, October 31 the altars will be erected in The Royal Cancun, The Royal Sands and The Royal Islander in Cancun and at The Royal Haciendas some in the lobbies, restaurants, gardens and behind the scenes in administrative and housekeeping departments. A panel of judges will begin their tour of the altars at 9 a.m. and will listen to each team’s presentation of their altar, the Mexican state it represents, the symbolism of the altar, items they have included such as flowers, photos and offerings of food and drink.

The altars must be in keeping with Mexican traditions, for example featuring flowers such as the orange marigold known as cempasuchitl, candles and incense, cut tissue paper and candy skulls, salt, water, fruit and offerings of food.

Where else can you see Dia de Muertos altars during your vacation?
Traditional Dia de Muertos altars are on display where ever you go in Mexico! You can see them at the Cancun Maya Museum and in Las Palapas Park in Cancun, in Playa del Carmen, at Xcaret, in Valladolid, Izamal and Merida, Yucatan. 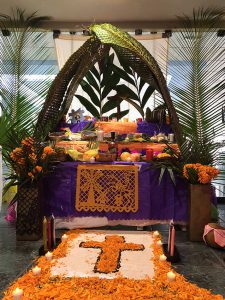