Welcoming back the sea turtles - Blog

Welcoming back the sea turtles

You are here: Home1 / Welcoming back the sea turtles

Welcoming back the sea turtles

May marks the start of the sea turtle season in the Mexican Caribbean. During the summer nights, thousands of female sea turtles will emerge from the waves to dig nests in the sand and lay their eggs. Royal Resorts is gearing up to watch over these maritime visitors and their precious offspring born later in the season.
From May to September, female green, loggerhead and hawksbill turtles struggle ashore to lay their eggs on the beaches of Cancun, the Riviera Maya, Isla Mujeres, Contoy, Holbox, Cozumel, Sian Ka’an and the Costa Maya in southern Quintana Roo. Forty-five to 60 days later, the eggs will hatch, and the baby turtles will break free of the shells and race across the beach towards the waves and a new life at sea. In 12 to 15 years, some of them will return to lay their own eggs on the same beach, repeating the eternal cycle.

Royal Resorts is proud to do its part to protect this ancient species that has been swimming the oceans for around 120 million years. A Cancun conservation pioneer, Royal Resorts has been watching over sea turtles since 1985.
During the 2021 season, 599 nests were protected at The Royal Sands, The Royal Islander and Royal Uno and over 54,000 hatchlings released. This means that since 1998 when official record keeping began, Royal Resorts has protected more than 10,000 nests and released more than one million baby turtles.

After a refresher course on turtle season rules and procedures given by local biologists, our security guards and turtle guardians are getting ready to begin their summer vigil. Night after night, they will patrol the beaches in search of nesting turtles. When they find one, they watch over her as she digs her nest and lays her eggs. They move the eggs to a nursery where they dig another nest identical in shape and depth to the original. They write down the species, date and time of nesting and number of eggs and watch over the nest.
When the baby turtles emerge, the guards release them after dark when predatory seabirds such as gulls and frigate birds have gone to roost.

If you are going to stay at Royal Resorts or Grand Residences this summer, please join us in protecting our turtle visitors. Follow the turtle rules:

The Mexican environmental agency SEMARNAT rules for turtle nesting season are designed to keep human contact with the creatures to a minimum. The rules stipulate that fragile baby turtles can only be released by trained personnel and not by hotel guests. Failure to comply with these measures can lead to resorts losing the right to have turtle nurseries on site or to be part of the turtle protection campaign. 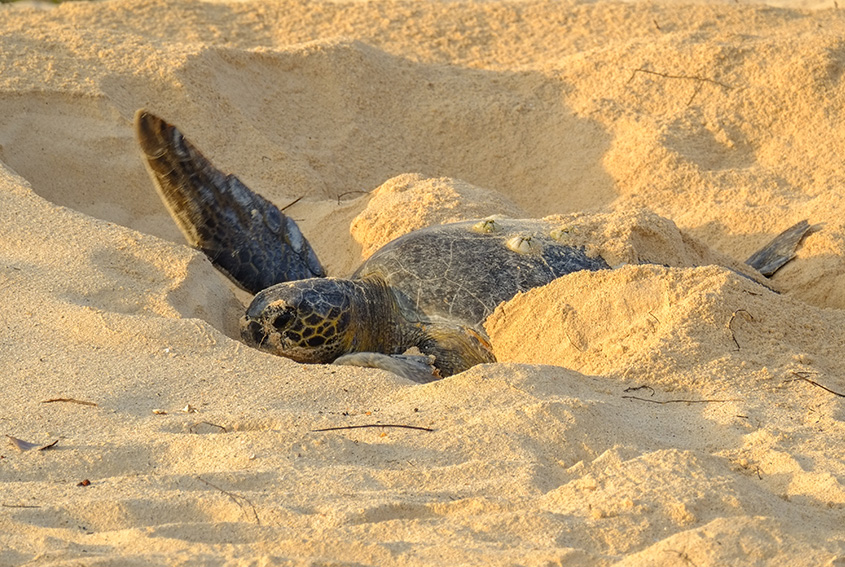