You are here: Home1 / Learn more about the Maya with a visit to Cancun Maya Museum 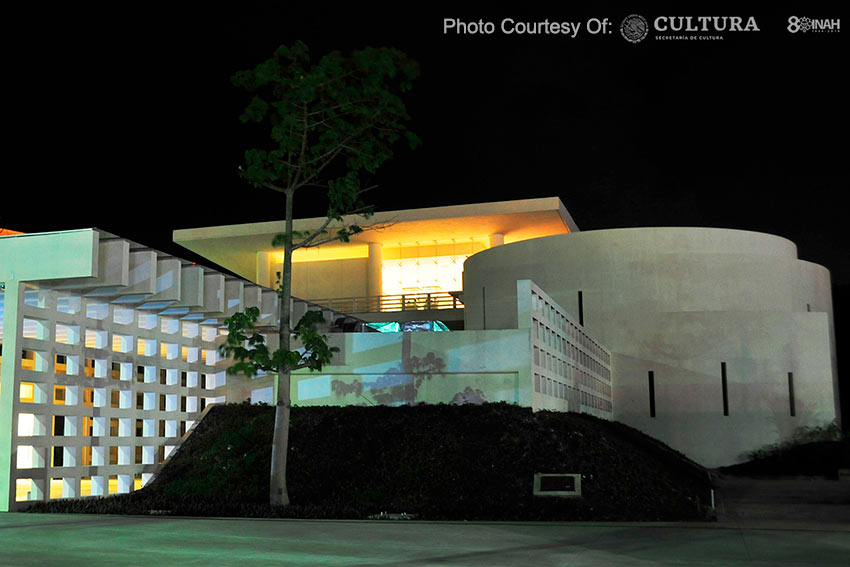 During your vacation, it’s worth visiting the Cancun Maya Museum for a fascinating look at the ancient Maya, their civilization, society, art and architecture. After your visit, step next door to the San Miguelito archaeological site in the jungle in front of The Royal Islander and carry on to El Rey, the largest Maya site in Cancun, on the shores of the lagoon.

Although the first gallery focuses on the ancient Maya in the state of Quintana Roo, it begins in prehistoric times with exhibits on the region’s earliest inhabitants, thousands of years before the Maya. It features a video representation of what life must have been like for nomadic hunter gatherers like the Woman of Naharon whose 13,499-year-old skeleton was found in a flooded cave in the Tulum area, along with the remains of sabre tooth tiger and other creatures that the men of the tribe would have hunted. This find, and others like it, are offering a glimpse of life in the Yucatán Peninsula in prehistoric times when sea levels were lower, temperatures were colder, and the caves were dry. As sea levels rose at the end of the Ice Age, the caves were flooded and became time capsules, which are being explored by cave divers and archaeologists. Their finds are forcing experts to rethink their ideas on how and when the Americas were first settled and where the clans of hunter-gatherers came from.

The remainder of the gallery’s exhibits showcase the state’s most important ancient sites, from the great city-states of the golden age of the Maya such as Dzibanche and Kohunlich in southern Quintana Roo, Cobá and Chacchoben to the later ports and trade enclaves of Tulum, Pole and Cozumel. Displays feature artifacts unearthed during excavations, including ceramics, stone and jade carvings from the pre-Classic, Classic and post-Classic periods of Maya history and objects dating from the Colonial period and the 19th century Caste War.  Items to look out for are polychrome vases from the Temple of the Owls at Dzibanche in southern Quintana Roo, jade and gold trade goods found at Tulum and clay figurines depicting the diving god, jaguars, turtles and birds.

The second gallery is dedicated to different aspects of Maya culture such as art and architectural styles, religion and rituals, warfare, agriculture and the importance of cacao, hieroglyphic writing, and trade throughout the Maya World and Mesoamerica. It features exhibits of sculptures, ceramics, masks and jewelry from archaeological sites in the neighboring states of Yucatán and Campeche and further afield in Chiapas and Tabasco. Of note are stone figures from Chichén Itzá, incense burners from the Site Museum in Palenque in Chiapas and clay tiles covered in ancient graffiti from Comalcalco in Tabasco, the westernmost city in the Maya World and the only one built with clay bricks, not stone.

Located in the Hotel Zone at Kilometer 16.5 of Kukulcan Boulevard opposite Captain’s Cove restaurant. The museum is open from 10 a.m. to 6 p.m., closed on Monday. Admission includes entry to San Miguelito.

On departure from the museum, it’s a short stroll to the site of San Miguelito in the jungle. Dating from AD 1250-1550, it consists of four clusters of stone platforms that would have been crowned by thatched dwellings, palaces, the vestiges of a temple with traces of the original decoration and a pyramid that is thought to be associated with the larger site of El Rey.