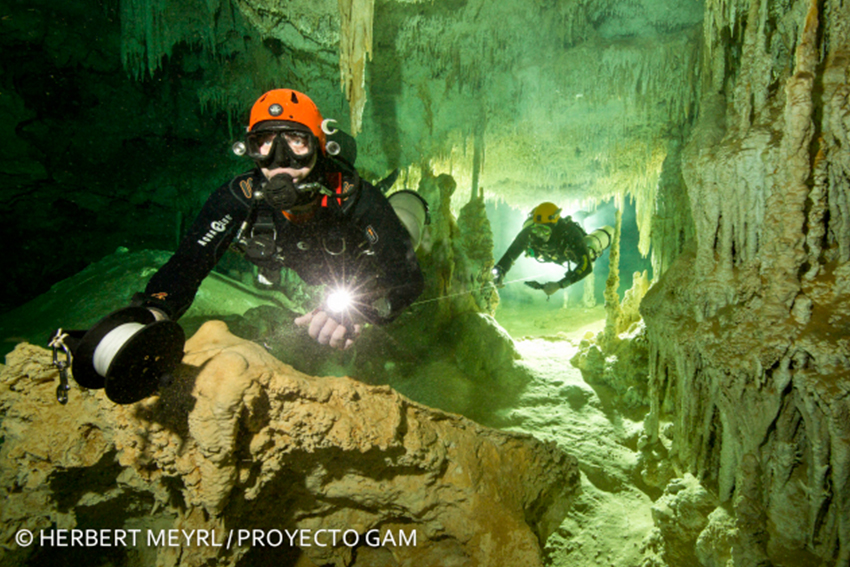 In a limestone landscape peppered with cenotes or sinkholes and caves, there has been another incredible Riviera Maya cave discovery. The world’s longest flooded cave system has been discovered in the Tulum area. After 10 months of exploration, the Gran Acuifero Maya (Great Maya Aquifer Project) expedition team of cave divers announced that they had found a tunnel linking the Sac Actun (white cave in Maya) and Dos Ojos flooded cave systems near Tulum in the Riviera Maya, Quintana Roo, Mexico. This connection means that Sac Actun is now the world’s largest known underwater cave; at 347 kilometers long, it is longer than the Ox Bel Ha cave system, also in the Tulum area. With 270 kilometers of mapped submerged caverns, Ox Bel Ha had previously held the world record.

When a tunnel connecting two cave systems is found the name of the larger one is adopted for both, this means that the Dos Ojos system is no longer known as such and now forms part of Sac Actun.

For Robert Schmittner, the cave diver team leader, the discovery is the culmination of 14 years of exploration of the Sac Actun system. Team members think that it is likely that Sac Actun is connected to other flooded cave systems in the area such as Ox Bel Ha and Kook Baal.

In another Riviera Maya cave discovery, the team also found a huge cenote to the north of Sac Actun that is 18 kilometers long and has a depth of up to 20 meters.

Mexican archaeologist and National Geographic explorer Guillermo de Anda, the Gran Acuifero Maya project director, revealed that during the exploration of Sac Actun the team had made some amazing discoveries that will help build up a picture of the early history of the Yucatan Peninsula. He referred to the flooded cave system as a huge archaeological zone, the world’s most important flooded historical site. The team has found the fossils of prehistoric animals, traces of the earliest human inhabitants of the Americas and structures, bones, ceramics, offerings and cave paintings associated with the ancient Maya. All are documented and left in situ so as not to interfere with the context.

This is the latest in the series of groundbreaking discoveries that the Gran Acuifero Maya expedition has made as it explores the mysterious Mayan Underworld, the network of cenotes and caves scattered across the Yucatan Peninsula.