Renew your ties with nature this winter by visiting one of the Yucatan’s great wild places, Rio Lagartos, gateway to the Ría Lagartos Biosphere Reserve. Witness one of its natural wonders, thousands of flamingos feeding in the salt flats or taking wing. There are so many of them that they literally turn the horizon pink. However, it is not all about flamingos, winter visitors to the reserve will also spot flocks of white pelicans, ducks, waders, songbirds and even hawks that migrate south to the Yucatan to escape the freezing temperatures of northern climes. If you are a nature lover, this trip is a must during your trip to Cancun or the Riviera Maya.

A natural treasure
Stretching along the coast of northern Yucatán, Ria Lagartos is a 60,348-hectare biosphere reserve of mangroves, salt marshes, dunes and tropical forest that is a magnet for bird watchers and nature lovers. It was the first area of marshland in Mexico to receive global attention and to be included on the UNESCO Ramsar list of internationally important wetlands and the federal government declared it a reserve in 1979.

The reserve’s biological diversity is incredible. Scientists have identified 365 bird species, 58 mammals, including the jaguar and spider monkey, the prehistoric horseshoe crab, 95 reptiles and amphibians, including four species of sea turtles and the crocodiles or lagartos that gave the reserve its name. 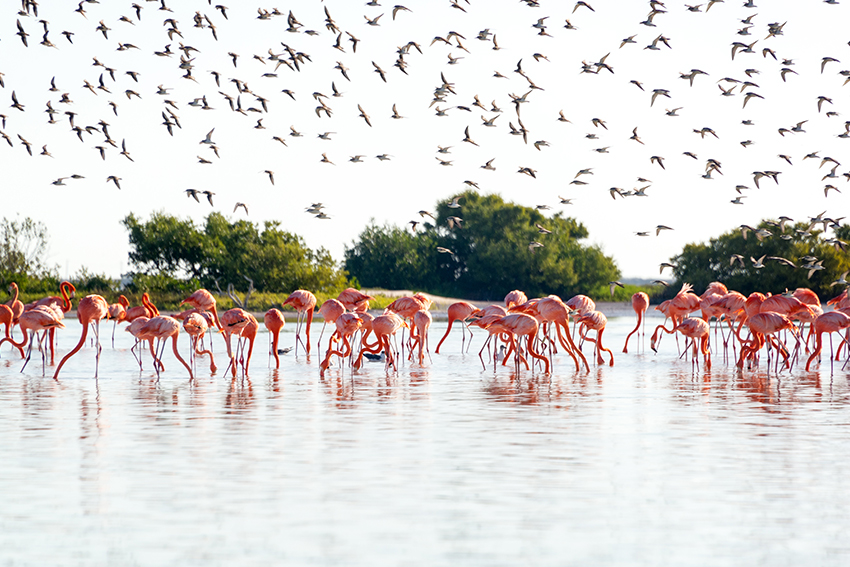 A flash of pink
Ria Lagartos is a refuge for the North America’s largest nesting colony of Caribbean flamingo (Phoenicopterus ruber). You’ll see them everywhere you look, high stepping through the shallows in their search for food, preening their bright plumage or taking wing. Flocks of these striking birds fan out from the reserve to feed in lagoons stretching along the coast from El Cuyo to Dzilam Bravo, Telchac, Uaymitun and Chabihau and a second colony inhabits the Celestun Biosphere Reserve on the west coast of the Yucatan Peninsula.

Flamingos feed with their heads upside down, underwater, moving their beaks from side to side in a sweeping motion as they walk forward. They stir up the mud, sieving it with their spine-covered tongues and extracting minute crustaceans. Sometimes they stamp their feet in a circle to stir the silt up.

Biologists have discovered that flamingos spend up to 70 per cent of their day feeding. The vivid salmon pink plumage of the Yucatan flamingos is the result of a diet based on tiny brine shrimps and other crustaceans found only in this area. 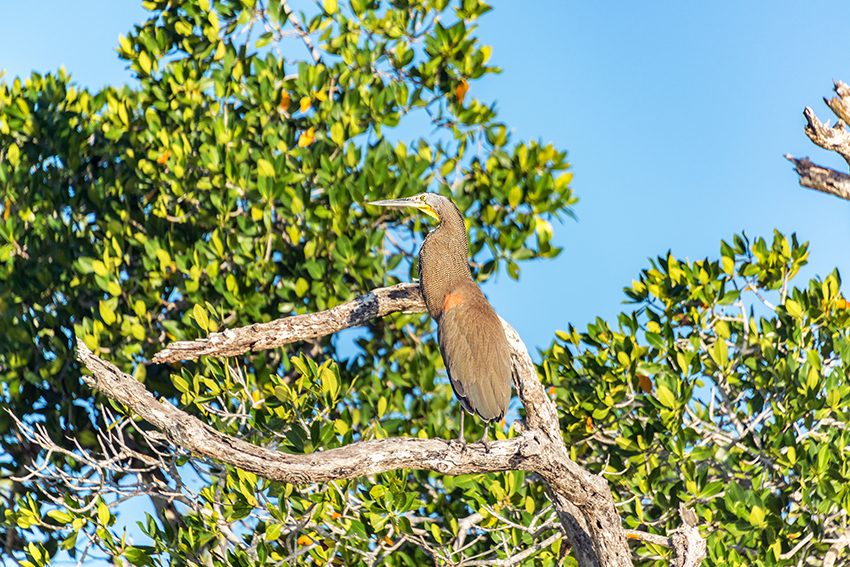 Exploring the wetlands
Fishermen from the waterfront village of Rio Lagartos offer boat trips along the ria or estuary and through the mangroves to the lagoons and salt flats where the flamingos feed. Many have been trained as nature guides and carry bird checklists to help you identify the species you see during your voyage.
Look out for reddish egrets, great white egrets, green and blue herons, and flights of wood storks. You’ll spot ibis, roseate spoonbills, kingfishers, peregrine falcon, black hawks and even hummingbirds. More difficult to see are the elusive kukas or boat-billed herons, so named for their broad canoe-like bills. 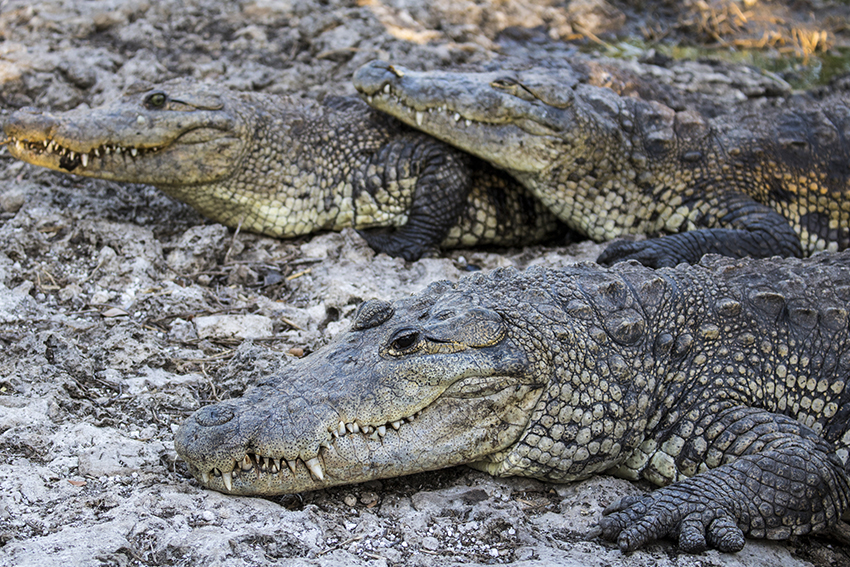 A strange otherworldly landscape
After chugging along the ría or estuary and through the mangrove forest where crocodiles sun themselves near the bridge, your boat enters the shallow lagoons where the flamingos feed. In addition to large flocks of the bright pink birds, there are cormorants, herons, white pelicans that fly south from the Arctic Circle and skimmers, black and white seabirds with a distinctive oversize orange bill. Lone ospreys patrol the skies and the air is full of squawks, honks and hisses.

On the horizon you can see mounds of the salt that has been extracted from the salt marshes since the days of the ancient Maya. To your left is Las Coloradas, a chain of brackish salt ponds in vivid shades of pink where the water is so salty it resembles the Red Sea, and the white mineral-rich clay is said to have therapeutic properties.

The intense blue of a cloudless tropical sky, the dazzling white salt hills in the distance and the bright pink salt ponds make this a strange, otherworldly landscape.

On your return to Rio Lagartos village, spend some time on the waterfront watching pelicans, terns and osprey diving for their prey and the fishing boats rocking gently at their moorings. Try the local seafood; it is incredibly fresh and delicious. And don’t leave Ría Lagartos Reserve without visiting the nearby fishing village of San Felipe. Its sandy streets are lined with brightly colored houses; there are more seafood restaurants and the beach is the perfect spot to watch the sun go down over the Gulf of Mexico. 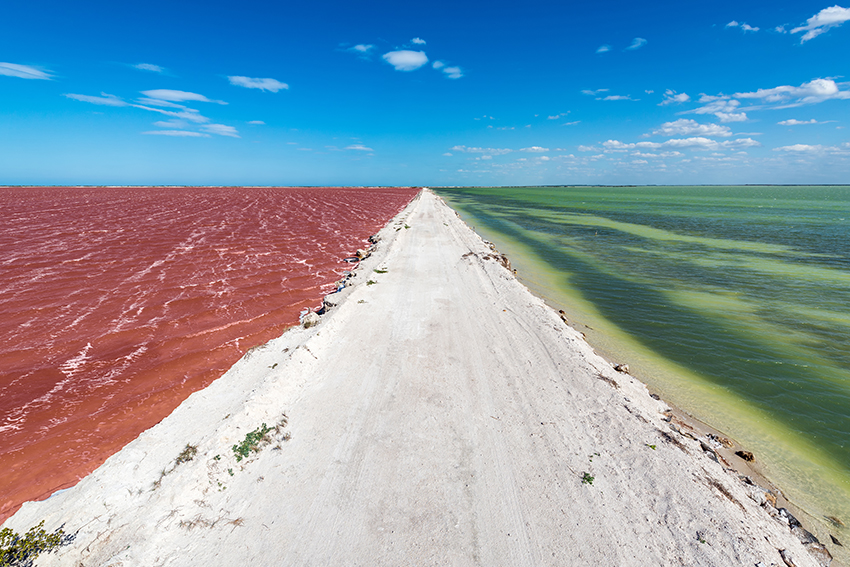 Getting to Rio Lagartos
Visit the Thomas More Travel tour desk at Royal Resorts in Cancun and the Riviera Maya where staff will help you arrange a visit to Rio Lagartos. Choose a tour that combines Rio Lagartos and the Mayaarchaeological site of Ek Balam, plan a private trip that takes in the colonial town of Valladolid too or spend as long as you can exploring the reserve with your own eco guide.

If you prefer to visit Rio Lagartos at your own pace, the reserve is a three-and-a-half-hour drive from Cancun via the toll road or Highway 180 to Valladolid and then Highway 295 to the coast, via Tizimin. If you would like to spend longer than a day in the reserve, there is a boutique hotel on the waterfront at Rio Lagartos; another option is to stay in Valladolid and drive to the reserve before day breaks, having already booked your boat trip and guide for a dawn departure.

You’ll see birds at any time of the day in the Río Lagartos Biosphere Reserve but they are more plentiful at sunrise and at sunset when they fly back to their roosts.